Wu-Tang Clan - Can It Be All So Simple

283 Aufrufe
Potter
Wu-Tang Clan's official music video for 'Can It Be All So Simple'. Click to listen to Wu-Tang Clan on Spotify: http://smarturl.it/WTCSpotify?IQid=WTCCBS

Started off on the island, AK Shaolin
n***az whylin, gun shots thrown the phone dialin
Back in the days of eight now, makin a tape now
Rae gotta get a plate now
Ignorant and mad young, wanted to be the one
Till I got (BAM! BAM!) thrown one
Yeah, my pops was a fiend since sixteen
Shootin' that (that's that s**t!) in his blood stream
That's the life of a crimey, real live crimey
If n***as know the half is behind me
Day one, yo, growin all up in the ghetto
Now I'm a weed fiend, jettin the Palmetto
In Medina, yo no doubt the God got crazy clout
Pushin the big joint from down South
So if you're filthy stacked up
Betta watch ya back and duck
Cause these fiends they got it cracked up
Now my man from up north, now he got the law
It's solid as a rock and crazy salt
No jokes, I'm not playin, get his folks
Desert Eagle his dick and put 'emin a yolk (AAH!)
And to know for sure, I got reck and rip shop
I pointed a gat at his mother's knot
(Yo, Rae, don't do that s**t, man! Don't do that s**t! )
Fuck that

Wu-Tang Clan - Can It Be All So Simple 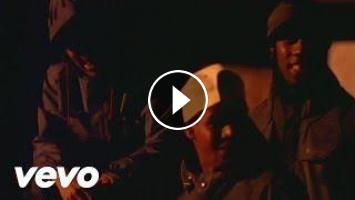 Wu-Tang Clan's official music video for 'Can It Be All So Simple'. Click to listen to Wu-Tang Clan on Spotify: http://smarturl.it/WTCSpotify?IQid=WTCC...