Jimi Hendrix with the Rolling Stones / Rocks Off Message Board - Thanks Albert Maysles!

284 Aufrufe
Potter
Just in from Rocks Off: http://rocksoff.org/messageboard the place for Rolling Stones News... also the real oldest Rolling Stones message board on the net since July 14, 1998 and the best too-..-. Rocks Off rules you bastards!

HEY!! After more than 4 years since this video was uploaded... We have real GREAT NEWS:

On one hand ABKCO released a deluxe and superdeluxe versions of Get Yer Ya Ya's Out with portions of this footage in very good quality and with AUDIO!!!, DVD and CDs of unreleased material and the opening acts; on the other hand, Sony Music Entertainment / Experience Hendrix LLC released for the first time the background music of this video in the box set "West Coast Seattle Boy"!!!! Go to any place to buy THEM!

NOTE: We have been promoting the Stones and their music since July 14, 1998 so please do NOT remove this video, it is posted with good intention and specially: we have authorization from the owner of the copyright.

This video has more than 6,000 different visitors per day, and our message board is visited by thousands of different fans daily so we are PROMOTING the work of the Stones, Rocks Off has appeared on Mojo Magazine, Rolling Stone and many other as one of the best places about the Stones and currently is the site of the year at the official website... so we are part of your own TEAM, again do not try to delete this if for your own good

Any doubt please contact me in private, thanks in advance

At 2:32 You will see Jimi playing a guitar duet with Mick Taylor.

At 5:50 You will be listening a conversation between Jimi Hendrix and Keith Richards, this is the only portion with the original audio. See below for a transcript of the conversation courtesy of YouTube user "limeginger"

This is Jimi Hendrix celebrating his last birthday backstage with the Rolling Stones at the Madison Square Garden in New York City on November 27, 1969.

Background music is "MY LITTLE ONE" recorded by Brian Jones of the Rolling Stones (sitar), Dave Mason from Traffic (sitar and bass) and Jimi and Mitch Mitchell from the Jimi Hendrix Experience. Recorded at the Olympic Studios in London on October 5, 1967.

[6:00-6:07] Jimi: Been watching too many formal dinner parties on TV. Everybody HAS to do this. You HAVE to say [mock ass-kissing, bowing and scraping] "Oh yes, Mr richards--"


For more information, pictures and everything about Jimi with the Rolling Stones, with much more about the takes of "My Little One", check http://rocksoff.org/jimi.htm

Jimi Hendrix with the Rolling Stones / Rocks Off Message Board - Thanks Albert Maysles! 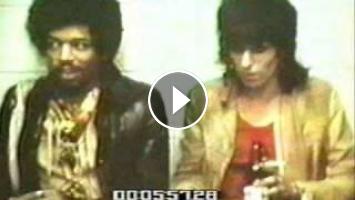 Just in from Rocks Off: http://rocksoff.org/messageboard the place for Rolling Stones News... also the real oldest Rolling Stones message board on the...