Tracy Lauren Marrow (born February 16, 1958), better known by his stage name Ice-T, is an American musician, rapper, songwriter, actor, record producer, and author. He began his career as an underground rapper in the 1980s and was signed to Sire Records in 1987, when he released his debut album Rhyme Pays; the second hip-hop album to carry an explicit content sticker after Slick Rick's La Di Da Di. The following year, he founded the record label Rhyme $yndicate Records (named after his collective of fellow hip-hop artists called the "Rhyme $yndicate") and released another album, Power, which went on to go Platinum. He also released several other albums that went Gold.

He co-founded the heavy metal band Body Count, which he introduced on his 1991 rap album O.G.: Original Gangster, on the track titled "Body Count". The band released their self-titled debut album in 1992. Ice-T encountered controversy over his track "Cop Killer", which glamorized killing police officers. Ice-T asked to be released from his contract with Warner Bros. Records, and his next solo album, Home Invasion, was released later in February 1993 through Priority Records. Body Count's next album was released in 1994, and Ice-T released two more albums in the late-1990s. Since 2000, he has portrayed NYPD Detective/Sergeant Odafin Tutuola on the NBC police drama Law & Order: Special Victims Unit.

In 1991, he released his album O.G. Original Gangster, which is regarded as one of the albums that defined gangsta rap. On OG, he introduced his heavy metal band Body Count in a track of the same name. Ice-T toured with Body Count on the first annual Lollapalooza concert tour in 1991, gaining him appeal among middle-class teenagers and fans of alternative music genres. The album Body Count was released in March 1992. For his appearance on the heavily collaborative track "Back on the Block", a composition by jazz musician Quincy Jones that "attempted to bring together black musical styles from jazz to soul to funk to rap", Ice-T won a Grammy Award for the Best Rap Performance by a Duo or Group, an award shared by others who worked on the track including Jones and fellow jazz musician Ray Charles.

Controversy later surrounded Body Count over its song "Cop Killer". The rock song was intended to speak from the viewpoint of a criminal getting revenge on racist, brutal cops. Ice-T's rock song infuriated government officials, the National Rifle Association and various police advocacy groups. Consequently, Time Warner Music refused to release Ice-T's upcoming album Home Invasion because of the controversy surrounding "Cop Killer". Ice-T suggested that the furor over the song was an overreaction, telling journalist Chuck Philips "...they've done movies about nurse killers and teacher killers and student killers. Arnold Schwarzenegger blew away dozens of cops as the Terminator. But I don't hear anybody complaining about that." In the same interview, Ice-T suggested to Philips that the misunderstanding of Cop Killer, the misclassification of it as a rap song (not a rock song), and the attempts to censor it had racial overtones: "The Supreme Court says it's OK for a white man to burn a cross in public. But nobody wants a black man to write a record about a cop killer."

Ice-T split amicably with Sire/Warner Bros. Records after a dispute over the artwork of the album Home Invasion. He then reactivated Rhyme Syndicate and formed a deal with Priority Records for distribution. Priority released Home Invasion in the spring of 1993. The album peaked at #9 on Billboard magazine's Top R&B/Hip-Hop Albums and at #14 on the Billboard 200, spawning several singles including "Gotta Lotta Love", "I Ain't New To This" and "99 Problems" – which would later inspire Jay-Z to record a version with new lyrics in 2003.

Ice-T had also collaborated with certain other heavy metal bands during this time period. For the film Judgment Night, he did a duet with Slayer on the track "Disorder". In 1995, Ice-T made a guest performance on Forbidden by Black Sabbath. Another album of his, VI – Return of the Real, was released in 1996, followed by The Seventh Deadly Sin in 1999.

His first rap album since 1999, Gangsta Rap, was released on October 31, 2006. The album's cover, which "shows [Ice-T] lying on his back in bed with his ravishing wife's ample posterior in full view and one of her legs coyly draped over his private parts", was considered to be too suggestive for most retailers, many of which were reluctant to stock the album. Some reviews of the album were unenthusiastic, as many had hoped for a return to the political raps of Ice-T's most successful albums. 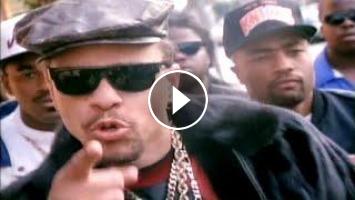 From the 1991 album, "O.G. (Original Gangster)". Also appears on the soundtrack to the movie, "New Jack City".Tracy Lauren Marrow ...